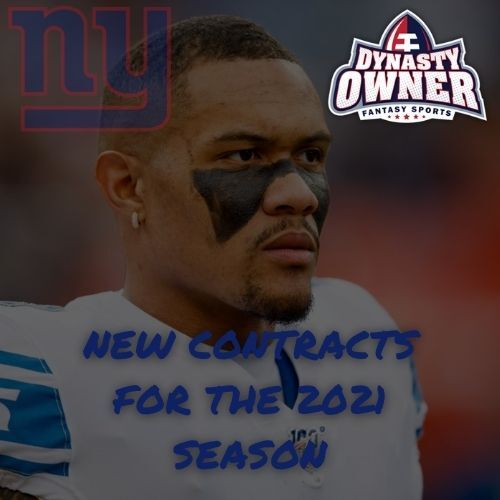 It’s time to review more new contracts! Just one week and one article and video weren’t enough to cover all of the new contracts, signings and re-signings so far in the 2021 NFL and Dynasty Owner league year. If you missed the first article and video highlighting the contracts signed before and during the 2020 season plus those after the season ended and in the first few days of free agency, then go here to read the article (https://dynastyowner.com/2021/03/new-contracts-for-the-2021-dynasty-owner-season/) and here to see the video ((185) New Contracts for the 2021 Dynasty Owner Season | Dynasty Fantasy Football – YouTube).

In addition to more new contracts, we have a new deadline on when Dynasty Owners need to deal with those contract changes. If you haven’t done so already with the initial set of contract updates, you still have time as Dynasty Owners now have until March 31st to fit the roster under the $127.75 million salary cap for the 2021 Dynasty Owner season.

It was a lot to process last week and with more contracts still being signed, it remains so now. If you rested after the first couple of days of free agency and haven’t been following all of the new signings, then it’s time to catch up. March 31st will be here before you know it.

All statistics and position ranking data listed are from the 2020 Dynasty Owner season. Updated 2021 salaries are currently posted on the Dynasty Owner website based on data from Spotrac (www.spotrac.com). All contract ranking data were accurate as of the morning of March 26th and taken from Spotrac using their Average Salaries ranking page (https://www.spotrac.com/nfl/rankings/average/), then sorted by position.

Kenny and the Rest

In the early days of the 2021 NFL free agency season, we saw several multi-year, double-digit million dollar per year salaries being handed out to WRs and TEs, such as Jonnu Smith, Hunter Henry, Corey Davis, Curtis Samuel and Nelson Agholor. After those guys signed, the big money stopped pretty much stopping flowing, except for one big name WR who signed a contract that is far different than the contracts signed by pretty much everyone else in the past few days. It’s like Kenny Golladay signed the Lamborghini deal, a few TEs got the Chevrolet deal, and the rest are fighting over whatever is left among the used cars.

Even though it’s NCAA tournament season, we’re not talking about freshman who play one year in college and then go off to the NBA. Nope, we’re talking about all of the WRs and TEs who signed one year contracts. There’s a lot of them, so we’ll only cover some and break them up into three categories. First, we’ve got the three guys who signed with a new team for more than they made in 2020:

The next group of players are those who signed with a new team as free agents, but took a pay cut to go along with their one-year contract.

The final group is two WRs who re-signed with their current team and took $8 million in salary for the 2021 season. They are now tied for the honor of being the 29th highest paid WR in the NFL. For one player, that’s an increase in salary, while it’s a decrease for the other one.

There are plenty of other WRs and TEs who signed new contracts, but are not listed here, such as DeMarcus Robinson, Chris Conley, Isaiah McKenzie, Jacob Hollister and Tyler Kroft. A few others have signed with new teams, such as Adam Humphries with the Football Team and Josh Reynolds with Tennessee, but their new salaries aren’t available yet.

A Six Pack of Running Backs

Nearly all of the RB excitement came before the start of the 2020 season with the re-signings of Christian McCaffrey, Alvin Kamara, Dalvin Cook, Derrick Henry and Joe Mixon to multi-year contracts worth $12 million or more per season. Aaron Jones signed his 4-year, $48 million contract ($12 million per season) just before free agency started. Since then, only one player signed a contract worth a total of over $10 million (Kenyan Drake for $11 million over two years with Las Vegas). We finally have another signing for over $10 million, a two-year deal for Chris Carson to return to Seattle. However, most of the RB deals at this stage are, not surprisingly, one year deals.

Just like RBs, all of the big QB news occurred either before the 2020 season when Patrick Mahomes and Deshaun Watson signed their new contracts or before free agency started last week. That’s when Dak Prescott signed his new contract. After that, Ryan Fitzpatrick and Andy Dalton signed $10 million deals and a few backup QBs got new deals with new teams (Mitchell Trubisky, Jacoby Brissett and Mike Glennon).

In the past few days, there has been little in the way of QB signings with the Raiders restructuring Marcus Mariota’s old deal and giving him a new one year contract being the biggest news. All of the recent QB deals are as follows:

As usual, we’ll close with the kicker position. After quite a few kicker signings right after free agency started, things also cooled down for everyone’s favorite players on their Dynasty Owner roster. Dynasty Owners may have missed these signings while trying to rejigger their rosters for the 2021 season. After that’s done, some Dynasty Owners might want to go out and grab two of the guys on this list while reassessing if the first one is worth his salary now.

In other kicker news, Justin Rohrwasser, who was one of the most highly drafted kickers in Dynasty Owner last year, was released by New England. He was drafted in every Dynasty Owner league in 2020 at an ADP of 180.4, which was the fifth lowest. He’s still owned in 34% of leagues now because of his salary cap hit of only $660,000.

NFL free agency continues on, but the pace of signings is slowing down. However, the clock is ticking for Dynasty Owners who now have less than a week to get their rosters under the $127.75 million salary cap. Between this article and last week’s one, we’ve reviewed over 50 different players with new contracts that take effect for the 2021 Dynasty Owner season. Many were big news and discussed on TV, radio, Twitter and everywhere in between, while others didn’t make big news. Regardless of how much attention these new contracts received, they all take effect now and impact your ability to manage the $127.75 million salary cap for 2021.

The importance of these new contracts and in an attempt to try and help all Dynasty Owners get ready for the 2021 season meant a two week hiatus from my usual Friday off-season articles and videos on getting you ready for your 2021 Dynasty Owner start-up league team. Those will be back next week.

Thanks to everyone for following, reading and watching! Good luck getting your teams under the $127.75 million salary cap without too many painful cuts.