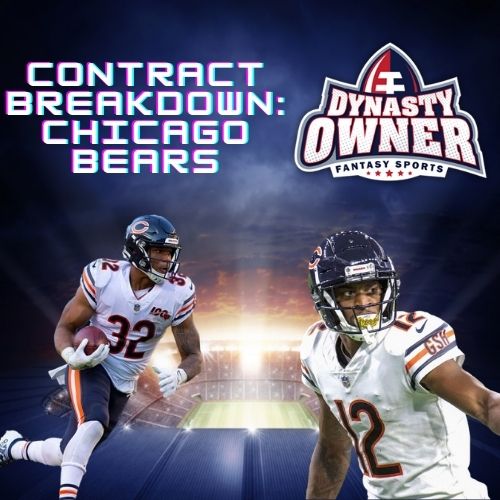 As I started in my previous article, today we are going to continue with the NFC North.  I laid out the division last week, and did a mini breakdown of each team and how they finished last year.  I didn’t include the chart of their finishes though so here it is…

The Bears finished second in the division with an 8-8 record.  Their lukewarm success was mainly based on their defensive efficiency.  The Bears ranked in the top half of least total yards and points allowed on defense.  Their quarterback play was shaky at best, and most people would call it below average.  Today, we are going to break down a couple of players from the Bears and use our value rating, Dynasty Dollars per Point (DD/PT), to assist us.

As much as I would like to talk about Justin Fields in this breakdown, the truth is that I would be basing it on massive speculation.  Not only do we not know when/if he is going to play this season, but then we would have to predict how productive he would be in those games.  Therefore, I’m going to center these two breakdowns around established NFL players that have a large sample size of production.  First, let’s talk about David Montgomery.

If I asked you where Monty finished in DO last season, do you think you’d be able to guess?  I had a guess, and it wasn’t even close.  My guess was RB9.  He actually finished as RB4!  That’s right, he was the fourth most productive running back in 2020.  While he was actually very consistent throughout the entire season, he finished on an absolute tear.  Here are his final six games…

That is one incredible ending to a season, and one that I somewhat predicted in my “League Winners and Playoff Predictions” article near the end of last season.  I made a bold prediction that Montgomery would finish the season with…

He blew those numbers away.  But equally impressive is how much value he provided on a season long basis.  When we talk about DD/PT, we are using a metric to try and define how “valuable” a player is.  It is used to show how efficient a player is when you compare them to their salary.  Montgomery finished behind only one running back in terms of DD/PT for the 2020 season.  His name is James Robinson.  Here is how Montgomery compares to his peers (there aren’t many).

There are a few things I notice right off the bat.  First, Monty not only had the most fantasy points of anyone in this list, but he also had the highest salary.  You may say, “well yeah, but those numbers are so close together that it is pretty much negligible.”  I wouldn’t disagree with that statement in terms of actual monetary value.  However, when you look at the percentage of these salaries when compared to each other, that is where it gets impressive.  For example…

David Montgomery makes $352,151 more than Myles Gaskin.  This is not a large chunk of money in terms of Dynasty Owner.  (It is 0.28 percent of the salary cap)  What it also means is that Gaskin makes 65% of what Monty does.  In order for Montgomery to have more value than Gaskin, he had to produce 249.8 fantasy points in 2020.  We can see from above that he ended with 269.8.  I do realize that Gaskin missed a big chunk of the season, but he was also very productive in the games that he played in.  The point is that Monty was an extreme value in 2020.  He was close to the most valuable running back overall.  So, the question is…”do I expect it to continue?”

I expect Montgomery to continue to be one of the most valuable running backs in 2021, yes.  What I don’t expect is that he will be as valuable.  One thing I conveniently forgot to mention is that Tarik Cohen played in less than three games last year.  He tore his ACL in Week 3 and did not return for the season.  Cohen will without a doubt take touches away from Montgomery (especially receptions).  This combined with the quarterback uncertainty in Chicago makes me hesitate on placing Montgomery in the top tier of value for the next couple of years.  Would I be happy to draft him in the third round?  Yes, I would, but as you can see from my running back rankings article a few weeks ago (https://dynastyowner.com/2021/06/contract-breakdown-running-back-top-10/), he is not in my Top 10 for value over the next three to four seasons.

The second and final player I want to quickly mention is Allen Robinson.  I talked about him last week as we know that he signed his franchise tag earlier this offseason.  His tag is worth $17,880,000 for a single year.  This makes him the ninth most expensive wide receiver on a yearly basis.  Here is how his peers compare to him…

***Full Disclosure:  Some of these players’ contracts have increased since the 2020 season.  Their DD/PT were actually different in the 2020 season as it was happening.  For my example, using these numbers do work though.  We are just using their 2020 stats compared to their current salaries.***

Robinson has a higher salary and more fantasy points in 2020 than any other player on this list.  That being said, they are all in the same ballpark for value.  Who on this list would you rather have?  If it were my pick, it would probably be Robinson.  Not only does he have the highest potential of any year, but he should see the most volume of any player on this list.  Robinson does not have a cheap enough salary to be a Top 10 value wide receiver, but there is no doubt he will be ranked as a Top 20 value wide receiver.

That concludes another article.  Thank you for tuning in and reading.  Message me on Twitter (@dynastyjerk) and let me know if you have any questions or concerns.  I would appreciate it if you followed @Dynasty_Owner on Twitter as well as subscribed to Dynasty Owner on YouTube.  Thank you all.  Take care and be safe. TheJerk